AHCC, the standard extract of cultured mushroom mycella, is mainly composed of acylated alpha glucans, derived from the extended period of culture/cultivation of the mycelia or roots of a hybrid shiitake mushroom. The alpha glucans are known to have beneficial effects on the body’s immune system.

AHCC is manufactured using state-of-the-art facilities by Amino Up of Sapporo, Japan. Amino Up is an ISO- and GMP-certified manufacturing company in Japan.

AHCC is the daily immune supplement of thousands and thousands of HEALTHY people in Japan and worldwide, to help their bodies fight the formation of abnormal cells, which can lead to infections, inflammations, chronic diseases, and cancer.

AHCC is also Japan’s leading complementary cancer therapy and its benefits are currently recognized in other countries like the US, China, South Korea, Brazil, Italy, Taiwan, Thailand, and the Philippines since 2011. Most recently, AHCC’s benefits have also been recognized in Saipan and in Vietnam. AHCC’s health benefits are the subjects of numerous peer-reviewed clinical studies and scientific papers conducted in leading universities such as Osaka University, Seoul University, Fujian University, and in MD Anderson, Columbia, Harvard, and Yale, which are well-known universities in the US.

AHCC has been used successfully in the reduction of the side effects of chemotherapy, in the improvement of the quality of life (QOL) parameters of cancer patients and those of other immune-compromised individuals.

AHCC has been marketed in Japan since 1989, (in the Philippines since 2011), and since then, no negative side effects have been reported, during the history of its use. 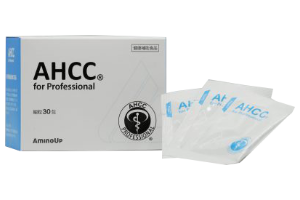 AHCC is available as a 450mg soft gel, and as a 1-gram powder in a sachet, and is best taken on “empty stomach”. To maintain a healthy immune system, 3 soft gels per day is recommended.

1. What is the action of AHCC?

AHCC acts on the cell-mediated immunity which is primarily composed of white cells and cytokines (proteins used by the cells to communicate to one another). People taking AHCC have been proven to have enhanced production of powerful cytokines like interferon, interleukin-12, and tumor necrosis factor-alpha. Interferons are responsible for the eradication of viruses, bacteria, parasites, and cancer cells. Interleukin-12 stimulates the function of certain white blood cells in order to kill pathogenic organisms and diseased cells. Tumor necrosis factor alpha’s two important functions are to prevent cancer growth and to combat viral infections. The overall activity of AHCC is an enhanced immunity to combat various diseases.

2. What is the role of AHCC in chronic diseases?

AHCC has an immune-modulation effect. It increases immunity if the immunity is low and down-regulates it if there is a hyperimmune response. Inflammation is now considered as one of the central factors in the development of the following illnesses: cancer, cardiovascular, renal, pulmonary, autoimmune, and neurological diseases; Alzheimer’s; diabetes; and asthma. AHCC was found to control blood sugar and ventricular arrhythmias. It is also beneficial for patients with hepatitis.

3. What is the role of AHCC in cancer?

It is being used to improve the immunity of patients with various cancers. Patients who received AHCC have cancer of the following organs: breast, lung, stomach, colon and rectum, liver, pancreas, prostate, testicles, ovary, uterus, thyroid gland, and bone. It was noted that AHCC was able to improve the survival of patients with liver cancer after liver resection and also patients who had gastric cancer.AHCC given to patients undergoing chemotherapy had fewer side effects. There are less vomiting, diarrhea, constipation, poor appetite, and hair loss.

4. Can anyone take AHCC?

It is recommended primarily for adult patients. However, it is always better to consult a physician before taking AHCC.

5. Can anyone take AHCC while taking other drugs?

Yes. However, it is preferable to take AHCC one hour before or after the intake of any of the patient’s prescribed drugs.

6. Do I need to take AHCC even though I eat shiitake regularly?

The compound is the end product of the culturing processes of the root of the shiitake. After which it is freeze-dried and put in a capsule as a concentrated form. A significant amount of AHCC is not present in the dietary shiitake that would give clinical benefit.

7. Is there any side effects?

AHCC is a nutraceutical and not a drug. There are no reported adverse side effects.

Click here to read additional information regarding the AHCC